Suro was an Ubudian legend who pounded the pavement for over 17 years.

He was the most reported dog to animal rescue groups and had a huge Su’pawt Squad looking out for him. 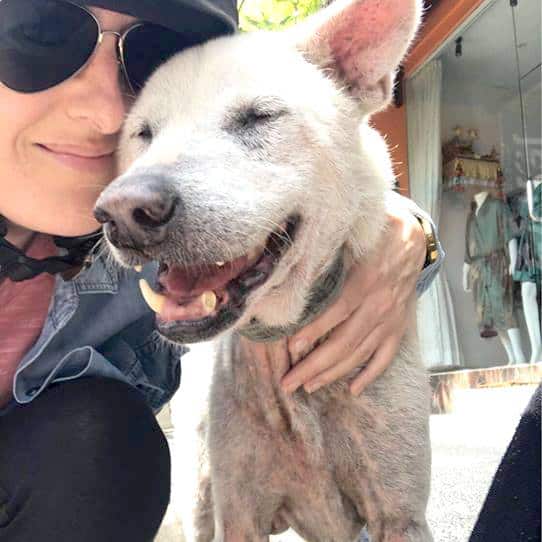 When I first met this handsome guy cruising through Ubud three years ago, he was slightly hairless and sweet. He was given skin meds and I was on my way. I saw him again 6 months later and he was looking good.

18 months after this encounter I was at Sunset Vet and I saw a dog in the garden, hairless and sad. I was told his name is Suro, he is 16 years old, he had an owner and another rescue group were helping him. I was shocked and elated. Shocked at his deplorable condition, but elated old’mate was getting some proper care.

Just 6 months later Suro was once again hairless. His owners were given more skin meds and medicated shampoo but we decided a new approach was needed.

Mission Paws’ible promised to take on Suro’s case and bills. He was collected and taken to Sunset Vet where he had the works – full blood work (which came back surprisingly well), skin scrape and medicated bath. His results were bacterial and malasezia (fungus) on the skin and a severe ear infection. A treatment plan was put into place. Suro was returned to his home with medicine and fish oil and enjoyed VIP service which included daily ‘meals on wheels’ with his daily medicine, ear cleaning plus weekly washes. He even got a new bed!

For several months Suro enjoyed and loved the new attention he was receiving . He was gaining weight and growing hair. He was happy. It wasn’t an easy journey but we persisted and he was grateful. Sadly, the day we dreaded would one day come, arrived. After months of great food and love , Suros health started to decline. His bones were weary and his muscles were sore. He was suffering stage 4 kidney failure and there was nothing we could do to ‘fix’ it. I sat with Suro at the clinic, he looked at me and said ‘I’m ready to go’. I ignored his words, held him close and cried. I loved that boy. I loved everything he represented. Strength, character, charm, resistance and love. Pure pure love despite the life he had to live in that broken body. RIP Suro – the toughest Bali Dog we have ever met.

Thank you to Suro’s Su’Pawt Squad. It is thanks to you he was able to enjoy the final months of his life furry with a full belly.

This year we plan to erect a statue in his honour containing his ashes. We are also in discussions to create a story book about his life and his important place in his community and Balinese culture.

He may be gone but we will never let him be forgotten.