The People Behind The Mission Vol. 1

Mission Paws’ible is made up of a team of passionate, animal-loving humans who want to give the animals of Bali a second chance. Every Su’Pawt Squad member is unique and brings their own set of special skills to the table. 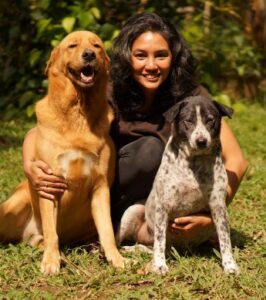 Zoe is Mission Paws’ible’s adoption manager. She is responsible for connecting potential adopters with one (sometimes even 2!) of our adorable rescue dogs. Zoe knows what to look for when rehoming an animal and she’s paw’some at what she does.

Before Zoe became a Mission Paws’ible member, she worked for several years in a similar animal rescue charity in Bali. Growing up with dogs and having a soft spot for animals, she spent many years feeding stray dogs that she would find along the streets or close to her home. Zoe’s most memorable rescue involves a dog that she named ‘Kuning’, which means ‘yellow’ in Bahasa Indonesia. Kuning was skin and bones when Zoe first spotted him near her house. He also had a terrible skin condition and was limping as someone on their motorbike had hit him. Zoe knew that a woman fed him but when Zoe tried to do the same, Kuning kept running away. Collaborating with the woman, the two worked together to feed and worm him, treat his skin condition with Bravecto, as well as organise for him to be sterilised. Slowly, Kuning started to trust Zoe. Even though Kuning was used to life on the streets, Zoe knew it was better for him to have somewhere safe to sleep at night. At first, she tried to rehome him in her own house, but he kept escaping back to the streets he had known all his life. There was a restaurant and home office close to Zoe’s house, so she organised for Kuning to be fed each day from the staff at the restaurant and sleep each night in the home office. These days, he also sometimes waits for Zoe at her gate in the morning and afternoon with a wagging tail! Kuning is now safe and has a village of people around him who look out for him and make sure he is always fed and looked after.

The biggest thing Zoe loves the most about working with Mission Paws’ible is the amount of care that goes into making sure the adopted animal always has a good home. “When we rehome, we are not just ‘giving away’ the dogs to adopters. We make sure the dog will be living in a fully-fenced house, never tied to a chain or kept in a cage and we also ensure that if an expat adopts a dog from us, they will take the dog back to their home country if they ever leave Bali”, says Zoe.

Zoe also sits on the board for Mission Paws’ible’s partnering Yayasan, Yayasan Proyek Peduli (YPP). She was inspired to do so because of the Balinese people. “The Balinese people love their dogs in their own way. YPP helps with education and takes financial situations into account” says Zoe.

When it comes to animal rescue in Bali, Zoe wishes that people wouldn’t just put the responsibility of rescuing an animal solely on animal welfare organisations. “Not only do the animals need treatment and food, but they also need a home and this is all with limited funds. Finding the right home for a dog after they’ve been rescued and rehabilitated is really important” says Zoe.

One of the biggest challenges that Zoe has faced with animal rescue is finding a family that will treat the dog like a family member and not just a piece of property. However, the most rewarding thing for her is seeing a dog transform from being sick and malnourished to happy and healthy and trusting humans again.

When Zoe isn’t rescuing, she runs her own dog grooming business. She loves reading books and watching videos about dog grooming to practice her skills in her spare time. She lives with her husband, son and 4 fur-babes – 3 dogs and a cat.